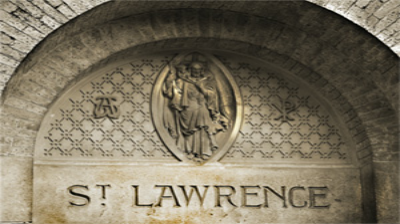 A history of St. Lawrence of Canterbury Sidcup

On the 22nd June 1911, the small parish of Sidcup was taken over from the Verona Fathers by the Marist Fathers. When the Marists took over, they inherited a half built church and £6000 worth of debt.  In the 1920’s the Catholic community increased and there was a need for more Catholic education. Girls were able to go to St. Joseph’s and St. Gertrude’s Convent school in Hatherley Road.  In 1924 a boys’ school, St. Mary’s College, was opened.  It was situated in the large house beside the church.

A fire in 1928 damaged the church so the parish set about raising the money to repair and finish the building. On the 27th of April 1930 the newly completed church was ready with a debt of £4000. In the 1940’s the organ was installed and a year later the pulpit and altar rails followed by the Sacred Heart and Our Lady’s altars.

St Lawrence’s Youth Club started in 1946 and by the1950’s St. Lawrence’s had many organisations running.  A hall in Hatherley Road had been purchased in 1947 which held many parish activities.

The parish continued to grow and in 1954 the Ministry of Education approved the building of a new boys’ grammar school, St. Mary’s Roman Catholic Grammar School, later to become St. Mary’s and St. Joseph’s.  St. Peter Chanel primary school was opened in 1975, and continues to be a very successful school. Sadly St Mary and St Joseph’s school has now closed and St. Mary’s sixth form college is on the site.

The nuns left Sidcup in 1988 and returned to Normandy.  By this time the Marist Fathers were not so numerous, as in most orders, vocations were becoming fewer. In 1997 a parishioner, Peter Varnes, was ordained to the permanent Deaconate.

In 2012 the Marist Fathers left Sidcup and the Diocese of Southwark took over the parish.  Fr. John Diver took over as Parish Priest in September 2012.  Brother Ivan stayed in the parish for a while to help with the transition, and though we went from several priests to just one, Fr. John Diver has managed to keep all the Masses and services going.

In 2013 3 Hamilton Road was purchased and the Presbytery and Parish Office have been decorated. In 2014 a toilet was added to the church making it more accessible than going into hall.

St. Lawrence’s is a very busy parish with a diverse congregation, who all celebrate and pray together.  There are many groups and clubs that meet regularly, as well as the appointed committees. The parish hall which is behind the church is a hub of parish and social activity.  The parish primary school, St. Peter Chanel is thriving and the holy communion and confirmation groups are growing.