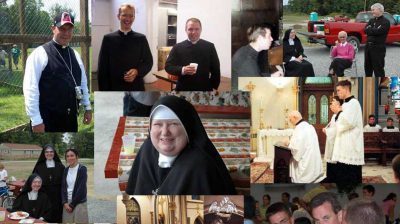 Our society is always changing so the Church and its ministers must always be open to renewal by the Spirit of God, reading the signs of the times. Whatever the changes in society or the renewed insights of the Church, however, the ordained ministry will remain the living sign and instrument of Christ the Good Shepherd. The pastoral love of Jesus our High Priest is made present in the pastoral work of bishops, priests and deacons, the three ordained ministries of the Catholic Church.

All priesthood in the Church is based on the one true priest of the New Covenant – Jesus Christ. It was Jesus as priest and victim who offered his life as a sacrifice on the cross. All those who are called ‘priests’ in the Church are not priests in their own right; they share in the unique priesthood of Christ. They are called to be “alter Christus” – another Christ.

The apostles were called by Jesus to follow him, and they left everything to be with him. This ‘being with Jesus’ is always the first part of any vocation, and this is true in a special way of the call to be a priest. Only once the apostles had grown close to Our Lord did he send them out to others. The priest has to be someone whose personal, intimate friendship with Christ is the very heart of all he is and does. Our Lord Jesus Christ is the centre of his life.

A priest’s life is rooted in the Eucharist: it is there above all that Jesus is present; yet people will meet the Good Shepherd not only in the priest’s great sacramental actions but in everything he does for them and in his simple presence among them.

This is why the priest is asked to give his whole life to God, to lay down his life out of love for the Lord and his flock. A priest is asked at his ordination to make three special promises:

celibacy, obedience to his bishop and simplicity of lifestyle.

In this way, he lives out the demands of the Gospel quite explicitly; he is unmistakeably a man of the Church of Christ. This is his path to holiness just as marriage is the normal path to holiness for most baptised Christians. The call to chastity is part of every Christian vocation, both within marriage and within the single state, where it is known as celibacy.

Celibacy is the universal norm for all bishops in all parts of the Catholic Church. It is also the norm for priests in the Latin rite of the Catholic Church, most commonly found in Western Europe and those places evangelised by Europeans. In the Eastern rites of the Catholic Church, found in Eastern Europe and the Middle East (including communities who have migrated to other countries), married men can be ordained to the priesthood. In recent years, the Latin rite has extended this Eastern custom of ordaining married men to former ministers of other denominations who have become Catholic. Ordination to the diaconate is open to married men but deacons who are single or who become widowed are not permitted to marry. All the ordained ministers of the Catholic Church are in a stable state of life so that bishops, priests and deacons can build stable, pastoral relationships with the people they serve.

From the very earliest days of the church deacons held a special place in the Christian Community, set apart along with bishops and priests for a special role modelled on that of Christ himself. ‘Deacon’ comes from the Greek word diakonos which means a servant or helper. In particular, deacons came to be considered helpers of the bishop, responsible for the community’s day to day material and spiritual well-being.

Those studying for the priesthood are ordained deacon as a step towards the priesthood (transitional deacons). The permanent diaconate was restored in the 1960s and those ordained as permanent deacons have a ministry in today’s Church that is far reaching. Working under their bishop and alongside the parish priest, they serve the Church through the celebration of baptism and marriage, by preaching and by helping the most vulnerable members of the community.

How do I apply to be a Priest or Deacon?

A first step would be to talk to Fr John

Morning Prayer of the Church: Sat 8:45 Rosary 9am